On 24 October 2015, the European Physical Society [EPS], the Belgian Physical Society [BPS, short for ‘Belgische Natuurkundige Vereniging – Société Belge de Physique’] and the International Solvay Institutes [ISI] honored the Hotel Metropole in Brussels as EPS Historic Site. At the initiative of Ernest Solvay, Hotel Metropole hosted in 1911 the first Solvay Council where the foundations of Quantum Physics where laid. A commemorating plaque was unveiled in the lobby of the Hotel by the president of EPS, Christophe Rossel, and the president of BPS, Jef Ongena, following an academic session attended by 80 participants. Welcome addresses were presented by Mr. Freddy Thielemans, past-mayor and representative of the present-day mayor of Brussels, by Jef Ongena, president of BPS, Marc Henneaux, Director of ISI and by Jean-Marie Solvay as President of ISI and representing the Solvay family. They described briefly how the scientific and philanthropic legacy of Ernest Solvay has been taken up and continued over a time spanning five Solvay generations. Christophe Rossel then portrayed EPS and the EPS Historic Site program. The much appreciated keynote address was entitled ‘The First Solvay Council on Physics: Legend and Facts’, delivered by Franklin Lambert from ISI and the Free University of Brussels (Vrije Universiteit Brussel – VUB). The attendance included members of Belgian and European academic and political institutions. Guests of honour were the many descendants of participants to the historic Solvay Council: fourteen family members of the Nobel Laureates that were present in 1911, three descendants of Ernest Solvay, and Mr. Wielemans, heir to the family that founded this famous hotel. The celebration was complemented by the publication of a European Physical Journal Special Topic issue entitled “The Early Solvay Councils and the Advent of the Quantum Era” (EPJ ST, Vol. 224, Nr 10, September 2015), edited by Franklin Lambert, Frits Berends and Michael Eckert. The articles are available online at http://epjst.epj.org. As a unique memory of this unforgettable day, a HDTV recording is made from the event, and will be made available soon at the websites of  BPS, EPS and ISI. 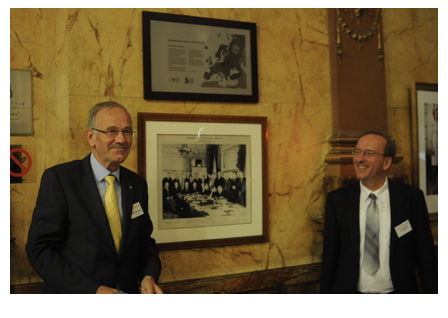 Christophe Rossel and Jef Ongena,after unveiling of the EPS Historic Site plaque. It is now prominently located on top of the historic picture of the 1911 participants in the lobby of Hotel  Metropole.

From 30 October to 3 November 1911, the Hotel Metropole was the venue of the Solvay Council, dedicated to what soon would be called “The Theory of Radiation and the Quanta”.

This was the first of a series of meetings, called “Solvay Conferences”, named after Ernest Solvay, a wealthy Belgian industrialist and scientific philanthropist, who issued the invitations to this first meeting.

This was a time when the foundations of physics were being shaken by the emergence of the quantum theory. The participants were 23 eminent scientists including Einstein, Kamerlingh Onnes, Lorentz, Nernst, Perrin, Planck, Poincaré, Rutherford, Skłodowska-Curie, Sommerfeld and Wien.

Their insights and exchange of ideas had a profound influence on the development of physics and chemistry in the twentieth century. 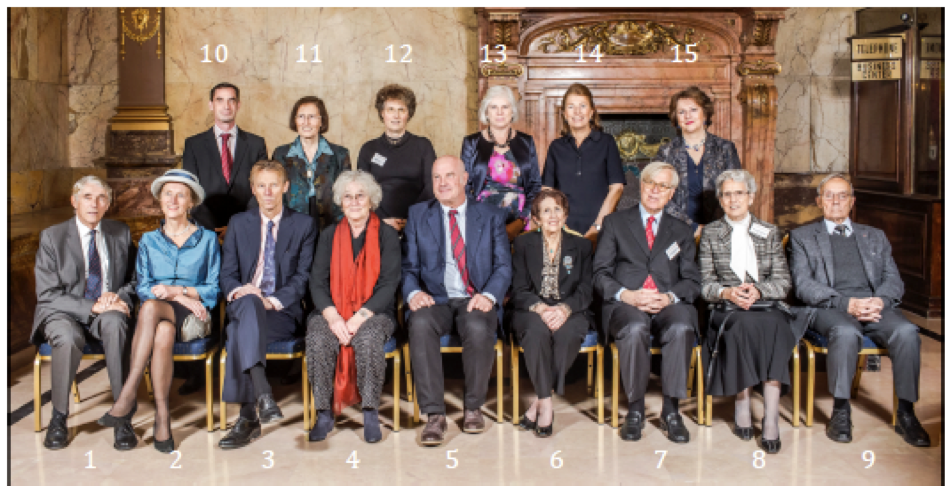